Well I finally nailed down my 2017 racing schedule, and I have to wonder- am I nuts? Am I doing too much? I have seven races on the schedule- and potentially 3 more- from February through November. It seems just a wee bit crazy, but then I remember- racing is my favorite thing about this triathlon business! And by folding in some travel and vacation with races and new challenges, I’m feeling anxious to get started.

A few of these are potential no-gos- the May 7th Spring Sprint, for example, is a fun course, but this was the one I did last year where my wave included the 65 year old men and I got swum over, and then all of the little kids started right after us, which meant I got swum over AND spent half the bike dodging the small tikes. I had a blast cheering on the kids, but as for a competitive race, it wasn’t a fun experience. It’s also very close to the half marathon, and I’m not sure my body will be fully recovered in time to go again. We’ll see.

Some of these are bucket listers. I’ve been trying to get to the Nautica Malibu tri since I started racing, but it always seems to fall on a weekend where I have something else going on- a trip, a wedding, whatever. This year I’m planning a romantic trip up the coast to see some of California I haven’t seen before, and I plan to stop and race Malibu on the way. I should probably let my husband know about that… 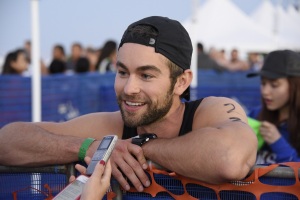 Hottie Chase Crawford competed in the Nautica Malibu Tri in 2015. Think we can convince him to race 2017?

Others are completely up in the air, like the July 4th Coronado Rough Water Swim. 4th of July is a BIG holiday for my crew, so scheduling anything except BBQs, Beers and Beach Cruisers is dicey, and we all know that I’m not a big fan of swimming through waves. But I feel like this is one where I could get my mojo back and conquer some demons. And if I can cajole some friends into doing it with me, then I’m all in.

Speaking of cajoling, in an effort to introduce more people to triathlon, I’m making some big changes to The Anxious Triathlete in 2017. More on that next week. In the meantime, comment below and tell me what your race schedule is for 2017. If you haven’t settled on one yet, I’d love to see you at one that I’m doing!