When I tell people that I do triathlons, 90% of them respond like this:

“My cousin/sister/boss/accountant did an Ironman.”

“That’s the race they do in Hawaii, right?”

Then I have to launch into my explanation of how there are different distances of triathlon, and that long-distance races are just one option, and that the ones I like to do are shorter, and that the race in Hawaii is actually the Ironman World Championships and it’s very hard to qualify. And after I explain that I prefer to only swim 500 meters, bike 12-14 miles, and run 3.1, I usually hear, “Oh. Well that’s not so bad.”

And then I smack my head against the wall.

Here’s something I think we all need to clarify: Ironman is a BRAND of triathlon races. Triathlon is not Ironman.

Ironman is a one billion dollar business. Billion. With a B. Their brand is built on being an extreme sport, one that gives the “every man” a chance to be an Ironman if they are tough enough, fit enough, and, let’s face it, rich enough. Because doing an Ironman race is not cheap. Entry fees alone will run you between $200 and $1000 depending on the race and when you register, and most races require travel that includes plane tickets, bike shipping costs, hotels and food. Add in family travel and gear costs and I would venture a guess that the average Ironman athlete spends a minimum of $2500 on one race.

I plan to do my entire 10-race season for that amount.

Ironman racing is cost prohibitive and time prohibitive, and that’s part of what keeps Ironman an exclusive club. I don’t hate on that. From a business perspective, what they’ve done to build a business off our young sport is impressive. Ironman does a great job with the annual NBC coverage of Kona, and anything that gets triathlon on television in a positive manner is a great thing for our sport. Their races are generally well organized and well-run. And you just have to see one or two “M-Dot” tattoos to realize they’ve built a cult-like following behind their brand. They’re the Mercedes of triathlon races. And they’re starting to expand beyond the 140.6 and 70.3 distances, picking up local short course races, buying established grassroots races, and venturing into single sport running and biking races.

Here’s what worries me. I worry that to the uninformed outsider, triathlon IS Ironman. And Ironman the brand is not accessible to the masses. Ironman athletes have coaches, and ambassadorships or sponsorships, and $500 wetsuits, and $10,000 time trial bikes. They’re extremely fit, love to suffer in a workout, and for some reason have near-professional looking photos of them on bikes littering their Instagram accounts. I know, this isn’t true for every Ironman athlete. But when you look at Ironman advertising, social media and other programming, that is 100% the lifestyle that Ironman presents. It’s a brand geared towards the hyper-competitive, type A, massive overachiever with some significant disposable income. Please know that I am in no way trying to put down long course athletes. I myself did an Ironman 70.3 race in 2016 and have lots of friends and teammates who race Ironman. I think it’s utterly amazing when someone completes the 140.6 distance, and I cry like a baby watching Kona coverage. But my Ironman friends will be the first to admit that training is time consuming, not family friendly, and exhausting. To do an Ironman, you have to be all-in committed for MONTHS. Your average outsider is going to look at that and say, “No thanks.” And if that average outsider thinks that Ironman is the only triathlon option, then we lose another person who could have helped grow our sport.

And we want to grow our sport. Growing our sport means more races and cheaper entry fees. It means a larger market for gear manufacturers and lower price points on products as competition grows. It means more innovation in the sport and more money for colligate programs. It means a greater focus on triathlon in the Olympics. It means more Gwens and Chrissys and Crowies and Brownlees for kids to look up to.

If we want the sport of triathlon to thrive, races HAVE to become more accessible.

We also need to stop asking short course racers when they’re going to “step up” to the next distance. We only have to look to a race like the Island House Triathlon to see that the long-course racer is not necessarily the “best” (best being defined as winner) in an even playing field. Distance changes are a lateral move, a new challenge. Getting to Ironman should not be considered the goal for all of triathlon.

Let me leave it at this. Many of my triathlon idols are long-course athletes. Mirinda Carfrae, Leanda Cave, Chrissy Wellington… I look up to them because they worked so hard to be the top of their sport. They persevere, and that’s what triathlon is truly about- perseverance to move forward when stopping is the easy option.

But when Ironman becomes the face of triathlon, we turn off a lot of great athletes who are looking for a new challenge. The athletes who have conquered 5ks and 10ks, or who swam in college but haven’t been in a pool in years, or who spend their mornings at an indoor spin class- THOSE people are our future triathletes. Those people are going to help us grow our sport. And don’t you think it would be easier for them to complete a nice welcoming sprint or Olympic race and catch the triathlon bug than to call it one and done with a 140.6?

Because swimming 500 meters, biking 12-14 miles, and running 3.1 isn’t easy. But it is doable. And anyone who completes it has 100% earned the right to call themselves a Triathlete. 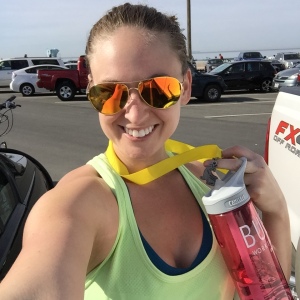 One thought on “Can I have a soap box moment?”