I got to my bike and was frantically looking around for my mom- I thought she had seen me pulled out of the swim by the lifeguards and would be freaking out, but she was nowhere to be found. So I took my time toweling off my feet, chatted with a couple people as I put on my shoes and helmet, and then headed out onto the bike course. My emotions were a little off. I no longer felt like I was racing- I was just lucky to be out there. And I felt like I was on cruise control. The bike route was a 4 loop out and back down route 75, and I ride that route all the time- it goes right past my parents house and was my main training route. So I know where to push and where to gear down, I know where the cross winds hit and where the road smooths out. It felt like I was just out for another bike ride!

It was starting to get warm, and I didn’t have a lot of calories in me to start, so I got a Honeystinger gel down and began chugging from my caffeinated Nuun with carbs added. After the first turn around I came across a guy who was blasting music from his phone while riding his bike. I was a little bewildered as I drew up next to him, and asked him if he knew we weren’t allowed to have electronic devices with us. He didn’t. This was his first ever triathlon, and he was going 70.3 in board shorts and tennis shoes with a camelback. God bless him. I told him I hoped he wouldn’t have too much chaffage, and we chatted for a bit and I shared a few nutrition tips with him as we rode together for half a mile or so. Then I told him I was going to open up my legs and bid him farewell. Side note- I saw him after the finish, and he confirmed that his undercarriage was a bloody mess. However, he vowed to do another in the same shorts. What a funny guy.

Going into the bike ride I was a little nervous about the U turns at each end. The one at the halfway point of the loop was a wide 2 lane turn with shoulder, so it was easy to pedal through. The one in town wasn’t evident on the map, and it was REALLY tight. It was also surrounded by spectators! Heading into it for the first time I had a brief vision of crashing on my face in front of these people, but it turns out I didn’t need to be nervous. I sat up, put my outside foot down, counterbalanced, looked through the turn, and swooped through like a rockstar. I was so stoked!

My nutrition plan was to grab a clif bar at the aid station and eat it on the bike, but they didn’t have bars on my first ride past. Bringing my own cliff bar with me was something I had debated hard, and I had decided against it since they said they would have them at the bike aid station. Now I was kicking myself for not doing it. Instead I grabbed a bottle of water and chugged a few gulps, tossed it aside at the trash and headed into town to hit the turnaround. During loop two I started to feel a little loopy (no pun intended) and forced myself to take another gel and chug more water. I realized I was one empty bottle down and a quarter into the second, and I also had to pee, so after loop two I stopped at the aid station to use the porta potty and refill my empty bottle. Stopping was kind of awesome- three minutes to get some feeling back in my butt and pull myself together. Even if another lady got territorial about the portapotty. To each her own, I guess.

I headed into town towards the turnaround and I finally saw my mom! I was happy to tell her I was alive and she was excited to see me. Back out on loop three, and the wind finally came out in full force. BAM! Right in the face! I expected it, I train in it, and I knew this would be a grind. My legs were starting to feel a bit of wear, but I kept chugging down and back. On to loop four, and I was so excited to be on pace and moving. My face, however, must not have showed it- volunteers started asking if I was okay. Racers passed me and told me to keep my chin up and keep going. I kind of cracked up. I was right on my pace! I really was doing great! 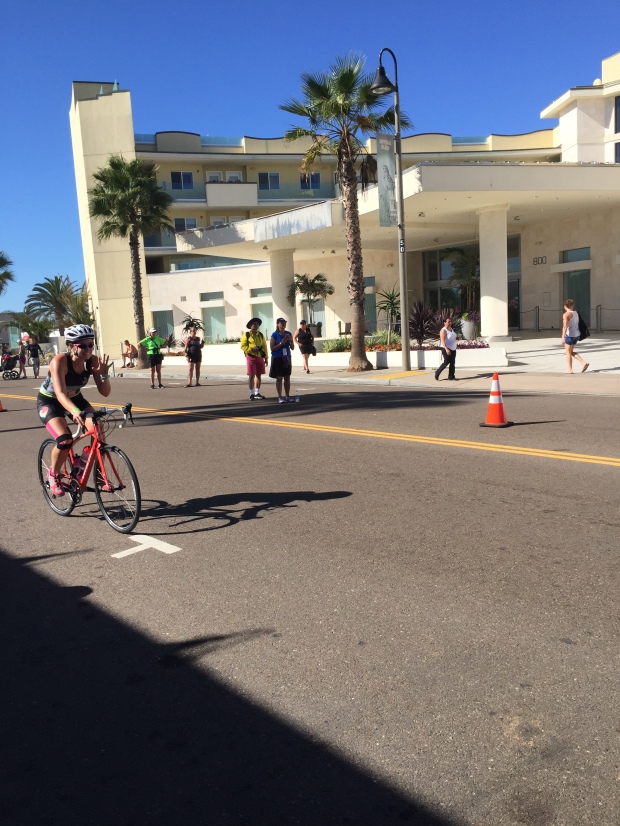 In the end I finished in 3:32- two minutes behind my goal time. Thanks to all those hours in spin class, on the trainer, and out on the strand, the bike ride felt like a breeze. I know I’m not very fast in comparison to the other riders, especially when they’re on tri-bikes going 30mph and I’m averaging 17 on my road bike. But considering that a year and a half ago I did less than one loop of that route, 12 miles, on my cross-bar and I averaged 13mph, I’m pretty happy with the progress of doing 56 miles in 3 and a half hours. I was also really happy with how comfortable I was on the bike- mounted and dismounted fine, swapped out my bottles fine, grabbed aid from the volunteers, shifted smoothly. I was one with the bike, and it felt awesome. Dismount went well and I walked my bike into transition, so happy to be on to the last leg!