This blog has been all about the nitty gritty basics of triathlon- the fun, the embarrassing, and the painful. Today’s post includes all three, because today I’m going to tell you about my first time riding in clipless pedals.

The name “clipless pedals” is a bit of a misnomer, since you clip the cleat of your shoe into the pedal. You push your shoe down onto the pedal until you hear a “click,” then twist your foot so the shoe releases. You’re literally attached to the bike, unable to quickly put a foot down when rolling to a stop or if you start to lose your balance. No problem on a stationary bike. On a moving bike, a little more nerve wracking.

I had been putting off trying the clipless pedals for months, but in order to up my cycling game I knew it was time for me to put on my big girl panties and deal with it. So, after twiddling my thumbs, I finally had the pedals put on my bike and took it down to a local bike path for a little trial run. I knew from talking to several cyclists that most falls would happen at low speeds when you don’t clip out in time and need to throw your foot out. They warned me to unclip well before a stop.

They also warned me that no matter how hard I tried to avoid it, I would fall.

So I mounted my bike and started out like I usually would, not clipping in until I had my bike moving. Then I gingerly pushed down on my right foot, wiggling a bit until I heard that click. In on the right. I pedaled a bit more to keep going, took a deep breath, and pushed down on my left. Click. I was in!

And honestly, the feeling was pretty awesome! Being clipped in allows you to both push and pull the pedal, creating a smoother stroke and more efficient transfer of energy to the bike. I was easily going 3mph faster, just using the same effort. I was sold on the benefits.

Now how do I stop?

Again, not as scary as I was anticipating. As I was moving I practiced clipping out of the pedals and back in, ready for when I would actually need to stop. When the time came, I unclipped my foot well before the stop, put it down, and grinned at my athletic prowess. This wasn’t so bad at all!

In my bravado I decided to venture away from the bike path and pedal the 3 miles to my aunt’s house across the river. So I made my way down the path, over the bridge, and into a much more congested part of town. There’s a main road I would have to cross, and I figured if I went far enough away from the center of town I could cross it where traffic was lighter and odds were that I wouldn’t have to stop.

See where this is going?

My right side went down- knee, hand, hip. I was stranded in the middle of the darn road. More embarrassed than hurt, I tried to jump up and recover only to realize that I was still really attached to the bike. I couldn’t stand up, I couldn’t get a good angle on my shoe to unclip it, and at a loss to figure out how to untangle and detach myself I briefly considered just laying in the street for a bit while I googled my predicament. Cars drove by slowly, some drivers showing concern, most outright laughing as they witnessed the entire slow collapse. A very lovely woman who had been walking by ran out to me, stranded in the middle of the street, and offered help and commiseration. She was a cyclist. She understood my shame.

In the end, I had to take my foot out of the shoe and leave it attached to the bike in order to stand up. I didn’t know what else to do. I was mortified. Thank god I had socks on.

But at least I’ve gotten that fall out of the way. 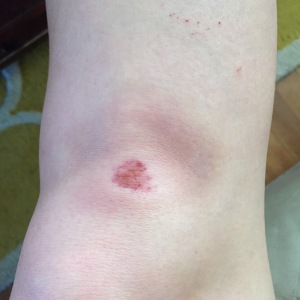 It hurt about as bad as it looks

I’ve figured out a few tricks since that first ride, and I’ll be sharing them in my next post with the hopes that your fall, when it comes, is slightly more graceful than mine!