Going into my first race, I thought the bike would be the quickest and easiest portion of the day. I learned to ride a bike when I was a kid. I averaged 23-26 miles on the spin bike during a 50 minute class. The course organizers promoted the bike course as a “flat and fast 20k,” just a quick 12 miles. I thought I’d be done with my ride in 35, 40 minutes tops.

Boy was I wrong.

Having survived the swim and blazed through transition, I grabbed my brand new, only ridden twice before Specialized Vita crossbar and ran it to the mount line. I got away cleanly and started the course, which was structured like a figure eight with the transition area being towards the top half- You left transition and headed north about a mile before turning and riding south for 6 miles and then taking a U turn to ride the 5 miles back to transition. I arrived at the first turnaround feeling good, like I was really competing in a triathlon! I passed the transition area, waving to my folks and thinking the end was near. I had probably been on the bike for 10 minutes and, not realizing that I was only about 2 miles in, was feeling pretty optimistic until I hit the headwind, saw the incredibly long stretch of road in front of me, and realized I was in trouble. Cycling is a big activity where I live, and many triathletes here come from a cycling background. So while I was pushing 12-13 mph on my heavy commuter bike, fellow competitors were whizzing by at 17-20 mph on their fancy road and tri bikes. I quickly realized that my many hours on the spin bike had done me no good, that I was pedaling to nowhere, and that I was way out of my league on this “flat and fast” bike course. 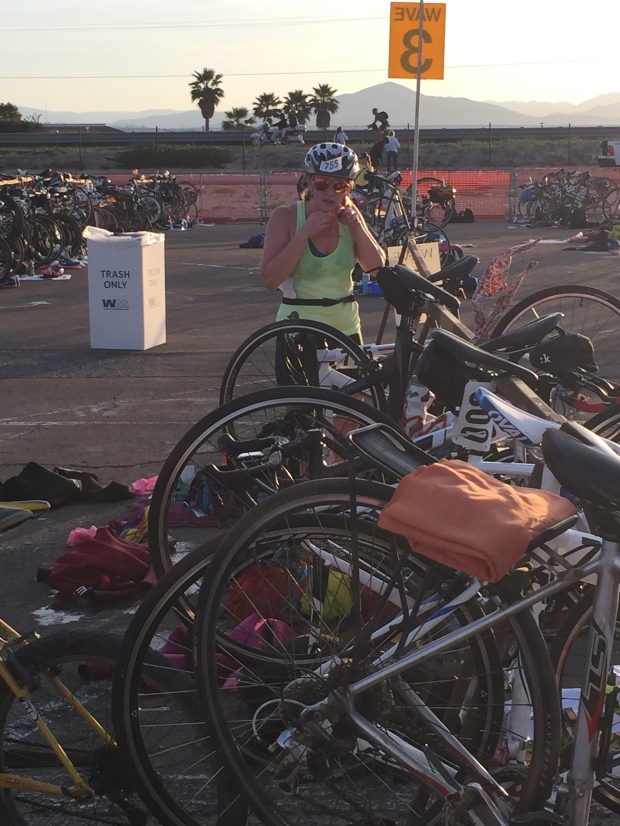 So eager to get out of transition. This is obviously before I was aware of the pain that was about to occur…

Halfway through the bike my back started to seize up. I had neglected my core work, and I was used to stretching forward and resting my upper body on the stable spin bike. That wasn’t possible on my crossbar, so I would sit up and try to stretch, then hunch back down again, then sit back up just trying to find some relief. Competitors from the waves behind were passing me like crazy, many of them giving me a “way to go, you’ve got this!” on the way by.

The jig was up- I definitely looked like a newbie out there.

Though I had studied the course map, I couldn’t figure out how many miles I had completed, and I had neglected to put on my fancy new heart rate watch. With no way to gauge my time or speed, all I could do was focus on getting to the end of the bike course. At some point I remembered that I needed to hydrate or I was going to be in for a world of hurt on the run, but I was too worried to take my hand off the handlebar to retrieve my bottle from the cage. I mentally slapped myself, forcing my hand to reach down and grab my bottle, and relief was sweet. Afraid to reach down again and put the bottle back, I pedaled with it in my hand for a good 5-10 minutes, wondering if I should just keep it in my hand, you know, just in case. I began questioning why I hadn’t practiced this maneuver before.

Finally the end was actually near. I made it through the final two hairpin turns without tipping over (woot!), made it to the dismount line where my parents were anxiously waiting (I took so long that they were convinced I was dead out there somewhere), and attempted to dismount my bike. I say attempted because that’s when my calf promptly cramped up and I was forced to awkwardly hop over my bike while shouting “Ouch, cramp, ouch, calf cramp!” (as if that would make the pain go away). In the end, what I thought would be a “40 minute tops” ride took me 51 agonizing minutes, and I vowed that I would never neglect my bike training again.

This week I’m covering the very basic of basics on starting your bike journey so that you don’t make the same first race mistakes that I did. Stay tuned!